I had a trip on my own from Penang in Northern Malaysia up to Chiang Mai in the North of Thailand  and there are few travel options to choose from.   The easy way to do this would be to fly and there are even  a couple of direct flights each week. On the other hand, the train passes directly by Penang and it was calling to me to try something more interesting.   Here are some of the details of the trip.

Georgetown, Penang is on an island and the train is over on the mainland so the first mission is to get over to the mainland.  I  started by catching a local bus to the jeti, the a dock area where you can catch a ferry  to the mainland.   The bus is 1.40 RM and the ferry is free, yippee!   It is a free  leaving the island but I believe it is 3 RM  to take the ferry  the other way.  The bus and ferry combined took about 1.5 hours.   Once you get off the ferry you walk out on raised walkways and you can see the train tracks below and beside is the new train station.

The train was just a few minutes later then the scheduled 14:00 departure.   A couple of minutes  loading up and we were away.   At plus  with train travel is you don’t have deal with the tedious security like at the airport.   The seats are large and comfy,  though there is not a huge amount of space for luggage.   I was lucky there was an empty seat or two around me so I easily found space for my gear.    Not long after we set out, the staff brought around a dinner menu with a half dozen  Thai dishes to choose from for later.  We trundled along for a few hours before arriving at the Thai border where we had to clear customs.  This involved getting off the train,  going inside the station to check out with Malaysian immigration, then walking around the corner and checking in with Thai immigration.  It was all fairly painless as these things go.   Got back on the train and expected we were going to depart right away but we sat for about an hour. This  is when dinner was served.  I am happy my tasty tom yum kung soup was not sloshing all over the place.

At around 9 PM the guy comes around to make up the beds.  I do get a kick of seeing how fast the staff converts the seating area into two bunks with crisp linen laid out.   The group of sweet Malaysian aunties sitting by me made their own efforts to build the beds but it didn’t go quite as smooth, though there were no serious injuries.  It costs slightly more but I much prefer the lower bunk as it is a little wider, has more head room and has the window.    It is just long enough I don’t have to scrunch up to fit in.   It was not a great sleep for light sleeper me but much better being on a bed then in a seat.   This train has only aircon option, not fan and it is plenty chilly believe me.   Be prepared with a long pants, jacket, etc.

The next morning brought lovely,sunny  rice paddy scenery of Southern Thailand.  This is definitely a plus point compared to flying.  You also have plenty of time to get acquainted with your fellow travelers.   The Malaysian aunties from Ipoh were always trying to feed me.  Also met a couple of young ladies from Canada that have been traveling  and blogging for 19 months and counting.  You can check out their blog, http://karinasextraordinarylife.com/

We finally rolled into Bangkok’s main station,  Hua Lamphong., around 12:30 , a couple of hours late and almost 24 hours after I  got on in Malaysia.  I  had booked a room at Cozy Bangkok Place close by the station . It is fairly easy to find if you follow their directions.  It was clean and affordable, though the walls are  not at all soundproof.   When you get to the room and you find earplugs neatly laid out on your bed for you,  chances are they are going to be noise issues.   There is not much interesting around the area but the MRT is only 10 minutes walk away and will get you all around the city.

The next day I  built some speed into the trip in the form of a flight from Bangkok (Don Mueang Airport) to Chiang Mai.   To get to the airport,  I chose to take the local train from the Hua Lamphong station  right to the airport.   At a cost of 5 baht (about 0.14 $CDN), it has to be one of the best travel deals going, next to that Penang ferry.    I got on the train sweating like a monkey after carrying my gear in the mid-morning  heat the few blocks from Cozy Bangkok to the station.  It is plenty hot on the train too and there was a lot time sitting at sidings as well.  DO NOT take this train if you are at all tight for time or a very uptight traveler, though perhaps it is no worse then being trapped in the infamous Bangkok traffic jams? 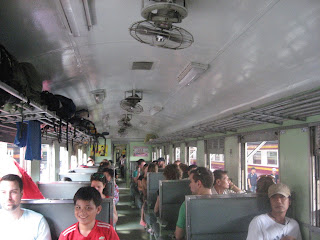 This airport handles budget airline domestic flights and is a bit of a gong show.  Fortunately I arrived 2 hours 40 minutes early so I didn’t mind.  After check in I went upstairs and had a meal at one of the two large Thai restaurants.  It was  a yummy duck noodle soup cost 150 baht  which is about 3 times what it should have cost though still only $5 CDN.   They have nice, quiet observation deck upstairs and air con so cold  you can almost see your breath. 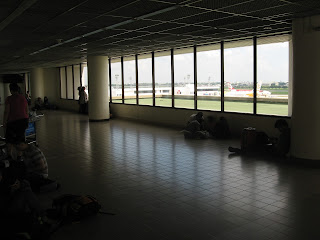 After security, there is lots of shopping and many chain food joints (boring).   The flight was with Thai Lion  and cost 1325 baht ($50 CDN)  with booking about a week in advance.  The flight was fairly full but all went smoothly.    Perhaps it was my charm and good looks, or maybe because I arrived so early but without even asking, I got assigned the best seat on the plane  just behind the  exit row. There was no seat in front of me and with miles of leg room.I enjoyed the puffy clouds and seeing the fruit and vegetable fields from above. 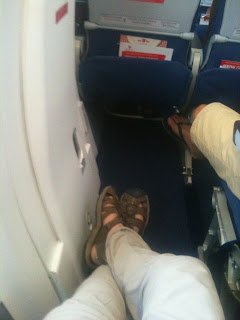 Arrived in Chiang Mai about 3 PM,  over 48 hours after leaving Penang.   Leaving the airport I was  a little naughty and caught a one of the red truck shared taxis back in to the city.   Leaving the airport you are meant to get the airport taxis which are 160 baht minimum.  The much more affordable red trucks are only supposed to drop people at the airport, not pick up,  but you can flag them down as they are leaving if you are quick.  I never asked  the driver the price, just told him the area  I was going.   He dropped off a couple of other people and then we arrived at my destination, long-time favourite guesthouse Banilah, and I asked him in Thai how much?   He said 80 baht, which is way too expensive.  I gave him 40 baht and  sent him on his way without a protest.

All in all no major regrets on this trip but next time I may just book that direct flight.